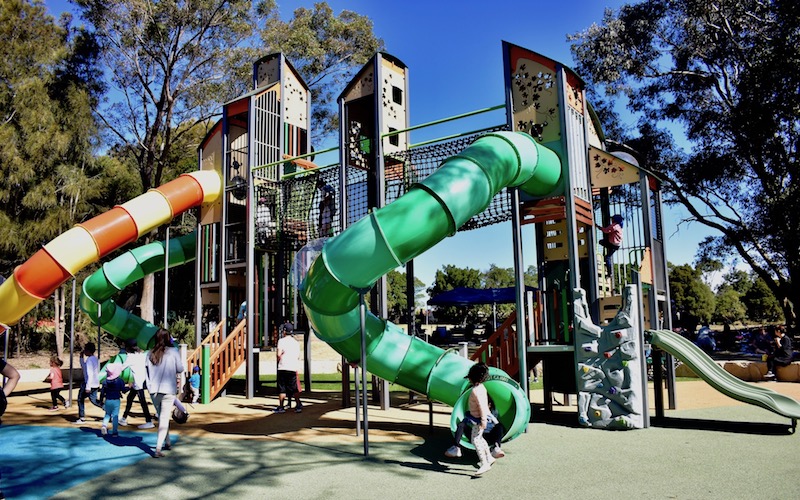 One of the oldest parks around and still going strong!  This park has sporting fields and facilities, one of the best playgrounds in the Inner West, bushy tracks and wide open green spaces.

Strathfield Park is one of Sydney’s oldest parks.  It’s Strathfield’s most popular park and plays host to major events such as Carols by Candlelight, Australia Day and Strathfield’s Movies in the Park.

This park is large! As such, it’s ideal for these types of large community events but the park is really made up of many smaller spaces and areas.

The park consists of 3 large sporting fields and 5 playing courts. There is an amenities block in the centre which houses bathrooms and also a kiosk (open on the weekends when sports are being played).

There are 2 playgrounds. One located on the Chalmers Road side is an equal access playground. The other is positioned on the opposite side of the park near the playing courts on Homebush Road. This playground has been recently redeveloped in a big way!

The new playground area combines 2 of the old smaller playgrounds and has created what is basically a series of linked playground areas – and it is amazing! The playground consists of a HUGE climbing structure with some seriously BIG slides, this structure also has a large climbing net, climbing wall and is a full playground in itself. Next to this area is a TRIPLE flying fox – and it has some serious rebound!

Moving further along, across a bushy path is a smaller area that suits the smaller kids, a smaller climbing fort structure, stepping and balancing features, little wooden teepees and some musical instruments! Move a little further into the corner of the park to yet another section and you’ll find swings, small climbing structures, a little maze, a tunnel and the modern version of the merry-go-round, all under a large shadecloth cover and on a rubber soft-fall surface.. There are plenty of aspects of these playgrounds that are suitable for all abilities.

To summarise, this is one of the best playgrounds we’ve ever seen. There are about 5 covered areas dotted around the playground complex – perfect for your next birthday party! Although only one has tables (at this stage) but there is plenty of shade to be had.

The park has numerous other areas perfect for a picnic lunch or just to relax in the sun.  There are paths perfect for scootering and bushy little tracks providing heaps of entertainment for kids, or they can just go and look in the rotunda!

Street parking is easy on both Chalmers Street (includes disabled parking and access) and Homebush Road.